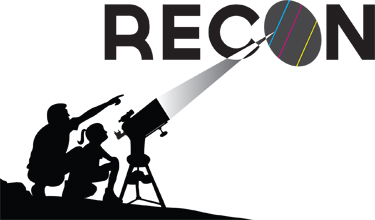 I’m sure you are aware of the many opportunities that exist today to do ‘citizen science’ - real scientific research being performed by members of the general public who are not professional researchers. Such projects include SETI@home, Galaxy Zoo, AAVSO, etc. There is one such program that involves two members of the ASN, and those members would like to see others (ASN and otherwise) get involved.

Project RECON (Research and Education Collaborative Occultation Network) is a citizen-science organization whose purpose is to observe and record the occultations of stars by some of the most distant and least well-known objects within the solar system. Known as TNOs (trans-Neptunian Objects), these objects, as the name implies, are objects orbiting our solar system beyond the orbit of Neptune. Many of these are from the Kuiper belt of objects (KBOs) orbiting out past Pluto (which is also considered to be a TNO). These distant, frozen bodies are thought to have co-evolved with the formation of the solar system, making them upwards of 4.5 billion years old. Determining the sizes and orbits of these bodies would help in determining their albedos (amount of sunlight they reflect), which in turn would help us determine their formation and compositions. This helps inform us about the origins and history of our solar system.

Project RECON was initiated in 2012-14 under a pilot program centered on a number of communities north and south of Reno, Nevada. This project was the brainchild of two researchers: Marc Buie of the Southwest Research Institute, and John Keller of University of Colorado. Marc and John came up with the idea of the project, developed the methods and equipment needed to carry it out, came up with a prospective list of RECON sites, and obtained support and funding from the National Science Foundation (NSF). Reno was one of the first sites approached for the project through UNR’s Fleischmann Planetarium. The pilot program initially involved sites from about central Nevada through Oregon and into Washington State. The program was later expanded to include approximately 64 sites located in a roughly north-south line 2,000 km long, and spaced approximately 50 km apart, between British Columbia, Canada, and Yuma, AZ, including teams in 5 western U.S. states. This line of telescopes forms a north south “picket fence” of telescopes. Each RECON site was initially equipped with a moderately-sized (11 inch) amateur Schmidt-Cassegrain “go-to” telescope. Also included were an analog astro-video camera, a device for ‘stamping’ the video frames with precise, GPS-derived time, and a computer to record the video data. This was later replaced with a high-performance digital CMOS astro-video camera, which has considerably improved the performance of the system. These cameras can provide accurately timed, real time ‘videos’ of the asteroid occultations.

As originally envisioned, RECON teams were primarily to consist of college and high school students, aided, and guided by their science teachers and astronomy professors. Students and teachers from the K-12 school systems were and still are being encouraged to get involved. Since the occultations tend occur in the middle of the night, the logistics of getting students and teachers to these events are challenging. However, some teams have managed to incorporate students and teachers with the dedicated local astronomers who are doing the challenging work of asteroid occultation observing.

On the night of a predicted occultation of a star by a TNO, the RECON teams set up their scopes and other equipment, point their scopes to the specific target star in the night sky, and record the occultation event with the astro-video camera system. As the TNO passes in front of the star, the light of the star will blink out for a few seconds, as a shadow of the TNO is cast upon the Earth at that location. The length of time the star is blocked—that is, occulted by the TNO--is directly related to the size and shape of the TNO as “seen” by its shadow on the Earth at each RECON site. Combining the observations and timed recordings of many RECON sites spread out in the 2,000 km long north-south line, one can then build up a large number of accurately timed occultations by the same TNO from all the different timed lengths of the TNO’s shadow observed at each RECON site. When all the various timed recordings are pieced together, the result is a very good determination of the TNO’s size, shape, and even whether it has any “moons” or rings surrounding it (a few have been detected with moons orbiting the main TNO body, and some have been detected with rings around them). Observations don’t always happen. Weather conditions, smoke and equipment problems can interfere with an observation campaign. Here in Reno, we are successful about 80 percent of the time in summer, and 50 percent in winter. After the event, the data collection computer is attached to the internet.

One very exciting aspect of project RECON is that NASA occasionally requests help with an asteroid occultation. These are usually in support of a space mission to an asteroid, etc. These help NASA plan the trajectories of space probes, such as the recently launched LUCY mission to the “Trojan” asteroids of Jupiter. These are often highly coordinated events offering a chance for RECON teams and NASA personnel to meet each other face-to-face at a campaign orientation and training meeting.

For more information on project RECON, including a short video of an actual asteroid occultation and published scientific papers, go to the RECON website at: http://tnorecon.net

The asteroid 372 Palma passes in front of a bright star for 10 seconds over northern California on January 26, 2007. These observations help determine the size and shape of the asteroids plus refine their orbits.